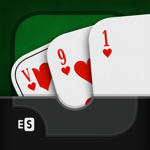 Play to the popular French Belote card game, against opponents simulated by an high-level artificial intelligence or with your friends.

All official rules and many variants are handled :
– Play with or without declarations.
– Play with No Trumps and All Trumps.

– Play alone against skilled AI players.
– Play Online through Game Center : Invite your friends, or let the Game Center find players for you.
– Play on LAN with your friends, via WiFi or Bluetooth.
– Play with a friend on the same device, each in turn.

Easy to use, the game is very fast and responsive, with card animation for a more realistic gameplay, and hd graphics.
Two visual themes available.

Your opponents and teammates are simulated by an high-level artificial intelligence, that knows the common strategies used in french belote card game. Therefore the game is very realistic, close to game with real players, and the challenge is high.

– Many options to customize the rules.
– Change the player's name.
– Change the speed of the game.
– Play automatically.
– Direction on play.
– Visual theme.
– And many more…

*** AN APPLICATION THAT WILL MAKE YOU BECOME BETTER ***

A section with statistics is included in the application, allowing you to monitor the evolution of our performances. And you can distinguish yourself thanks to Game Center Achievements and Leaderboards.

For beginners, rules of French Belote are also included into the application.

Finally, you can at the end of the round see all the tricks, and replay the round if you want, to train and try new strategies.

For any question regarding the application : [email protected]