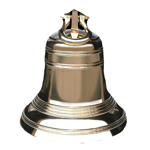 This application plays the sounds of a ship's bell every hour and half hour. The strike of a ship's bell are used to regulate the sailors' duty watches. Unlike a regular clock, the strikes of the bell do not correspond to the number of the hour. Instead, there are eight bells, one for each-half hour of a four-hour watch.

By design, the app just plays the Ship's Bells in the background, which enables one to tell the time without looking at a time piece – just as they did in the early days of sailing.