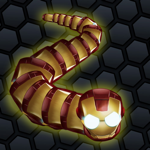 This is an alternative client for #1 smash hit worm Game.
You can play realtime-online with millions people playing over the world
[How to play]
– Eat little dots and agar
– Avoid bigger worms
– Try to slither around enemies and become the biggest worm possible

Play against other people online! Can you become the biggest worm
Watch out – if your head touches another worm, you will be explode and then it's game over. But if you get other worms to run into YOU, the THEY will explode and you can eat their remains 🙂

Unlike other games, you have a fighting chance even if you're tiny! If you're a nimble navigator, you can swerve in front of a much larger snake to defeat them – no matter what size you are!

The biggest worm of the day gets to set a victory message that the ENTIRE WORLD will see!